Call Us Email Us

Does Foiling Attract Shoppers More Than Non-Foiled Cartons or Sleeves?

This is a summary of a report on an initial study of the impact of the use of foil on packaging on consumer attention as seen on the Package Insight website.

The study was developed in conjunction with the Foil & Specialty Effects Association to observe the effects of foil stamping on consumer interaction.

Foil (stamping) is also known as foil application. In this process, foil stamping machines use heat and a die or mould to transfer metallic foil to the printed cartonboard sheet. The most commonly used types of foils are gold and silver foils but there are many types and variations available so please talk to us if you are considering foiling before you commence your artwork design.
Tel 847 0044 sales@dollard-packaging.ie

In many cases, areas that have been embossed or debossed will also be gold or silver foiled.
The image at the top shows a close-up example of gold foil shown on the words “Dunnes Stores – Simply Better” on a carton printed by Dollard Packaging

Hypothesis of the Foil Study

The hypothesis was that packaging that was embellished with foil would get more attention on retail shelves when compared to the same product packaging without foil.

The report also states “In addition to adding to the perception of quality and providing security, foil also attracts attention. This is particularly critical when attempting to differentiate a product on a crowded supermarket shelf. An article from PRS Research stated: “Across hundreds of studies, perhaps the single most consistent (and intuitive) finding has been that shoppers do not consider product categories fully and systematically. In fact, we’ve found that most shoppers only actively view about 50 percent of the brands within a category. The remaining 50 percent of the brands never get a chance to sell, because they are never seen (“unseen is unsold”). We’ve also found that there is very high correlation between how quickly a brand is seen/considered and its likelihood of purchase.”

The report describes some high-profile products that changed their packaging to include foil stamping which resulted in increased market share or increased revenue. These include: Colgate Total Toothpaste Launch, Gillette MACH Razor Launch, Zantac Antacid and the Olive Oil product for Best Choice Private Label Products.

Clearly, the success of these products could not be proved to be due solely to the use of foiling on these products. This desire to categorically prove the effectiveness of using foil was one of the main reasons for the study being commissioned.

The study was carried out by the Sonoco Institute of Packaging Design and Graphics at Clemson University, in partnership with R. Andrew Hurley’s research program. They conducted an eye-tracking study in the CUshop Consumer Behaviour Lab. Three separate packaged product categories were tested over the three-day period.
The report describes the study procedure in detail which included over 265 participants. (Participants were not offered any incentive to participate). The procedure was quite rigorous and involves the use of special glasses which track the pupil movements at the rate of 30 frames per second and had a front facing camera to capture the scene that the participants were looking at. Each participant only participated on one day of the three-day experiment. Demographic information about the participants was also collected.

The report clearly explains all its definitions and how the data was collected and aggregated. For the purposes of this article, only two definitions are of importance.
These are:
Time to First Fixation: The time it takes for a participant to find the package of interest once they had entered into the product category

Fixation Duration: The length of the fixations in seconds within an AOI (area of interest, this is the packages with and without the foil).

It should be noted that the Foil and Special Effects Association interpreted the data that was supplied to them by the Sonoco Institute of Packaging Design and Graphics at Clemson University. The report gives information which can be summarised as follows and as shown in the graphs below.

Time to First Fixation results:
As can be seen from the graph, the packaging with foiling attracted the shopper’s attention faster than the package with no foiling. It should be noted that the time to first fixation was significantly greater than the control (i.e. the foiled packaging) for two of the three packages tested. 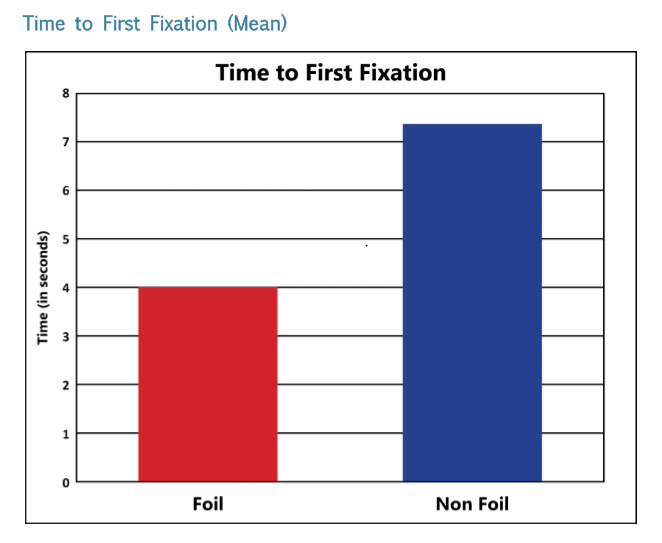 These results are significant as the ability of a product to attract the shopper’s visual attention has a strong influence on a consumer’s decision to purchase, according to Tobii, the manufacturer of the tracking eye glasses. (Source: Eye Tracking as a Tool in Package and Shelf Testing, Tobii Technology AB, November 2008)

The study showed that the shoppers looked at the packages with foiling for longer than packages with no foiling. It should be noted that the time difference was less than a second as can be seen in the graph. This graph below relates to the three specific products that were being monitored. 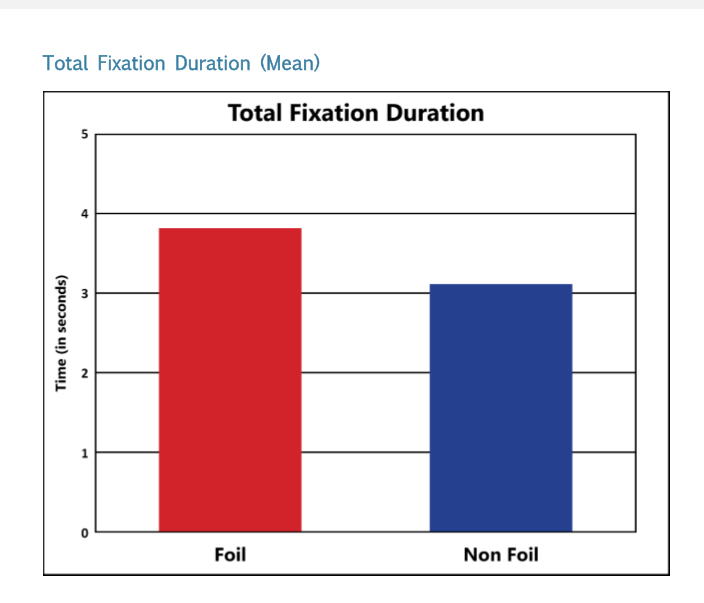 Effect of Foiling on Fixation Duration

The final graph below relates to a portion of the study that monitored all foiled packages on display and not just the three packages that were in the area of interest. (AOI) This also shows that any packaging with foiling got a longer attention duration from the shopper than non-foiled packaging. 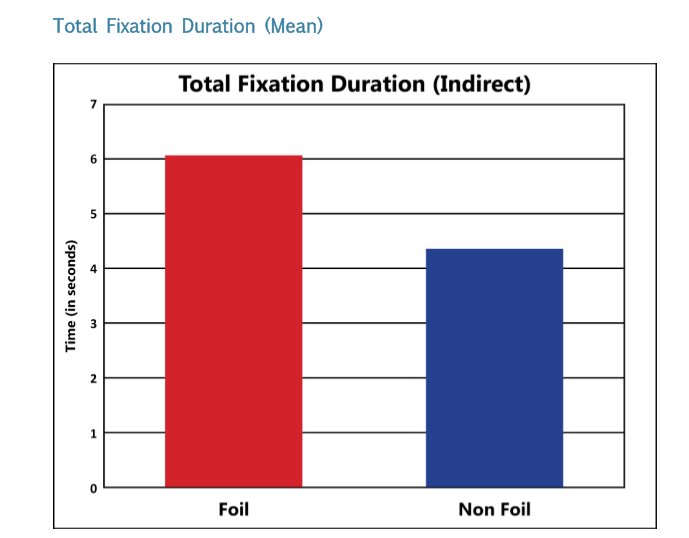 This study shows that foiling helps to get packaging noticed faster and maintain a longer duration of attention from their shopper. if you are considering including foiling in your packaging design, please make sure to consult your packaging supplier first before getting your artwork created so that we can advise you if your proposed packaging is suitable for foiling and advise you on the cost of the type of foiling you are looking for. Also it should be remembered that specific tools are required for foiling and that while it is a little more expensive but it can be very effective as shown in the study. Foiling also comes in a range of colours (not just silver and gold)

You may want to read more about enhancing your packaging with special finishes in one of our previous blogs.

Contact Dollard Packaging if you have any queries on any aspect of packaging.

This website uses cookies to improve your experience while you navigate through the website. Out of these, the cookies that are categorized as necessary are stored on your browser as they are essential for the working of basic functionalities of the website. We also use third-party cookies that help us analyze and understand how you use this website. These cookies will be stored in your browser only with your consent. You also have the option to opt-out of these cookies. But opting out of some of these cookies may affect your browsing experience.
Necessary Always Enabled
Necessary cookies are absolutely essential for the website to function properly. This category only includes cookies that ensures basic functionalities and security features of the website. These cookies do not store any personal information.
Non-necessary
SAVE & ACCEPT